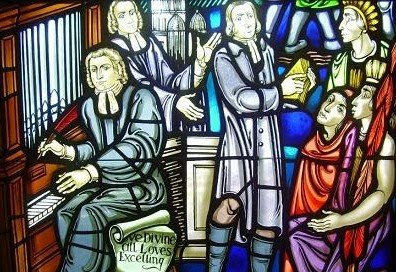 The calendars of some denominations mark today in honor of John and Charles Wesley, eighteenth-century Anglican ministers who were instrumental in spreading the Methodist faith throughout the United Kingdom.
John Wesley is regarded as one of the founders of the Methodist Church, though he himself insisted that he always remained a member of the Church of England. Much more has been written about his theology and his history than can be easily covered here. He worked closely with his younger brother Charles in spreading his beliefs, and both men saw hymns as opportunities for teaching. John translated many hymns from other languages, while Charles wrote original texts (though edited by John). The brothers issued eight collections of hymns between 1739 and 1746 alone.
Charles Wesley is said to have written more than 6,500 hymns, of which a very large number are still known today. That many hymns would have to encompass a large number of subjects; the hymnologist John Julian writes of Charles:
His feelings on every occasion of importance, whether private or public, found their best expression in a hymn. His own conversion, his own marriage, the earthquake panic, the rumours of an invasion from France, the defeat of Prince Charles Edward at Culloden, the Gordon riots, every Festival of the Christian Church, every doctrine of the Christian Faith, striking scenes in Scripture history, striking scenes which came within his own view, the deaths of friends as they passed away, one by one, before him, all furnished occasions for the exercise of his divine gift.
He sometimes wrote hymn texts that would suggest other works familiar to his followers. One of his best-known hymns was intended to evoke memories of the poet John Dryden's ode to England, Fairest isle, all isles excelling. Wesley's text has now far outlived Dryden's, being sung across many denominations around the world and to many different tunes. Though I would not go so far as to call this my favorite hymn, I do think that it is one of the most perfect hymns ever written.
Love divine, all loves excelling,
Joy of heaven, to earth come down;
Fix in us thy humble dwelling;
All thy faithful mercies crown!
Jesus, thou art all compassion,
Pure unbounded love thou art;
Visit us with thy salvation;
Enter every trembling heart.
Breathe, O breathe thy loving Spirit,
Into every troubled breast!
Let us all in thee inherit;
Let us find thy promised rest.
Take away our heedless sinning;
Alpha and Omega be;
End of faith, as its beginning,
Set our hearts at liberty.
Come, Almighty to deliver,
Let us all thy life receive;
Suddenly return and never,
Never more thy temples leave.
Thee we would be always blessing,
Serve thee as thy hosts above,
Pray and praise thee without ceasing,
Glory in thy perfect love.
Finish, then, thy new creation;
Pure and spotless let us be.
Let us see thy great salvation
Perfectly restored in thee;
Changed from glory into glory,
Till in heaven we take our place,
Till we cast our crowns before thee,
Lost in wonder, love, and praise.
Charles Wesley, 1747 ; alt.
Tune: HYFRYDOL (8.7.8.7.D.)
Rowland Hugh Prichard, c.1830
The second verse is often left out since John Wesley left it out of his 1780 collection Hymns for the Use of the People Called Methodists, but I have always liked it.
Charles Wesley's hymns have been sung by many different denominations, but naturally the Methodists are the most avid users; their hymnals generally contain more of Wesley's texts than any other author's.
The stained glass window above depicts Charles at the organ, with this hymn at his feet, but I'm not sure which of the other figures is John. It's possible that John is behind Charles, bestowing his favor on the man in the center, perhaps Thomas Coke, named by John as the first Methodist bishop in the US. However, both John and Charles did travel to America and spent time in Georgia. The window is from the World Methodist Museum in Lake Junaluska, NC.
Posted by C.W.S. at Tuesday, March 03, 2009

I may have commented on this before, CWS,that is the variance in text from different hymnals. I have now seen 3 different fifth lines in v.2; your post is one. Another is "Take away our bent to sinning" - which I learned growing up in the Church of the Nazarene (Methodist roots). The third would be "Take away our love of sinning" - in the Presbyterian hymnal I currently use. Interesting, eh?

Yes, that's what hymnal editors do, for one reason or another. Many things have been taken into consideration over the years as the words are changed.

I believe Wesley's original line was "Take away our power of sinning." Each different set of changes was undertaken to make the line more palatable or more in line with a particular theology or doctrine.

If I may turn from the Wesleys for a moment, consider Rowland Huw Prichard. Credited with Hyfrydol, one of the most widely used tunes in recent hymnals (my comprehensive list at the moment gives fully 26 tunes set to it, list below). The man, loom tender's assistant though he may have been in his golden years, was a composer of great genius. Did he write no other tunes? I haven't been able to find any. But he put out a (children's) hymnal; maybe Hyfrydol wasn't the only valuable tune in it. I wonder if the only bar to the recognition of other of his tunes may be Tonic Sol-Fa notation... Do you or does anyone here know of any of the others?

The 26 hymns set to Hyfrydol in one or more of my indexed hymnals are:

Four where I concur with the majority in preferring Hyfrydol:
Alleluia Sing to Jesus
Come thou long-expected Jesus
God the Spirit guide and guardian
Jesus what a friend for sinners

Five where I definitely prefer a different tune:
I will sing of my Redeemer (My Redeemer)
I will sing the wondrous story (Wondrous Story)
Lord whose love through humble service (Beach Spring)
O the deep deep love of Jesus (Ton-y-Botel)
Praise the Lord ye heavens adore Him (Faben)

17 where I reserve judgment:
Born among the peasant strangers
God the all-wise and Creator
God whose giving knows no ending
God you spin the whirling planets
Hail the glorious golden city
Hear what God the Lord hath spoken
Lavish love abundant beauty
Let us hope when hope seems hopeless
Like a tree beside the waters
Love Divine, all loves excelling
Not alone for mighty empire
Praise the source of faith and learning
Sitting at the feet of Jesus
Thou whose purpose is to kindle
We have come at Christ's own bidding
We, O God, unite our voices
When in awe of Gods creation

I believe that HYFRYDOL was from that children's songbook, published in 1844. Don't know what happened to the other tunes, though I doubt they are lost completely.

I agree that this tune is somewhat overused with modern hymn texts -- I think some hymn writers believe that their words are more likely to be sung if they are matched with a familiar tune. On the other hand, I don't usually think much of new hymn tunes, so that leaves us with a dilemma. But really, a little variety in "familiar" tunes would be welcome.

Of course, I did use it myself in my "comic oratorio" Jonah Was a Prophet (Minor), for a text beginning "On a swift Phœnician trader"... Anyhow, it's this overuse issue that leads me to be undecided on the best tune for "Love Divine"; I was brought up on Beecher (as virtually all US Baptists and Methodists are), but I'm more than a third inclined to opt for the British solution, Blaenwern, on this one.