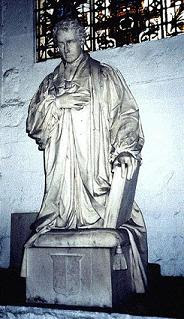 English bishop and hymnwriter Reginald Heber (April 21, 1783 - April 3, 1826), was born in Cheshire, where his father was a clergyman. His academic career at Oxford University was very distinguished, and he was himself ordained in the Anglican church a few years later.

He then spent sixteen years as rector of Hodnet, a village in Shropshire, and it was during this period that he wrote nearly all of his hymns, some of which were published in church periodicals. Hymns were not yet a regular part of Anglican worship, but Heber knew how popular they were among Methodists and other Dissenting congregations.

He began to assemble a collection of new hymns, written both by himself and by friends of his, such as Henry Hart Milman. Two Church of England bishops were approached for permission to publish a hymnal with suggested hymns for each Sunday of the church year. Heber wrote of the "powerful engine" that hymn singing was becoming in other denominations, and that it might be better to regulate, through ecclesiastical approval, the content of hymns rather than to try to suppress them altogether. Approval was denied.

In 1823 Heber was appointed Bishop of Calcutta. He had turned down the appointment twice before but finally consented. He traveled extensively throughout his domain (which at the time included all of India, Ceylon, and Australia) and was acclaimed for his hard work. However, he died suddenly in India in 1826, following a service where he confirmed forty-two people.

After his death, his wife Amelia finally received the necessary permission to publish the hymnal he had worked on years before. Hymns Written and Adapted to the Weekly Church Service of the Year (1827) contained all fifty-seven of Heber's hymns, including this one, which is still sung today.

Bread of the world, in mercy broken,
Wine of the soul, in mercy shed,
By whom the words of life were spoken,
And in whose death our sins are dead.

Look on the heart by sorrow broken,
Look on the tears by sinners shed;
And be thy feast to us the token,
That by thy grace our souls are fed.

John Sebastian Bach Hodges (yes, his father was a composer) was born in England but lived in the US for many years. He attended Columbia University and the General Theological Seminary, and was ordained in the Episcopal Church, serving congregations for many years. Given that name he was perhaps destined to have at least some musical interests, and he did write some hymn tunes and helped compile more than one hymnal.

P.S. The kneeling statue of Reginald Heber by sculptor Francis Chantrey is in St. Paul's Cathedral in London. Chantrey also erected a statue of Heber in Calcutta.

One Year Ago: Saint Anselm

Thanks, and especially for the link that alerted me that Google Books hath the Bishop's hymns adapted in what appeareth to be their entirety. Do you happen to know which hymn is alluded to when, at the end of the Preface, it is written that "[s]ince the publication of the first edition, another hymn by the Bishop has been found, which is now added to the collection"?

I noticed that too, and can only guess (as you probably have also) that it's one of the last dozen or so more general hymns. Presumably he had already assigned each of the others to its respective Sunday of the church year.

Heber's hymns are somewhat transitional, between Watts /Wesley / Newton and the later Victorians. I think that the ones that we still know are exactly the ones that we should still know and the others are best left in the past (I don't always feel this way, which I think I've amply demonstrated).