All the Earth Shall Be Made New 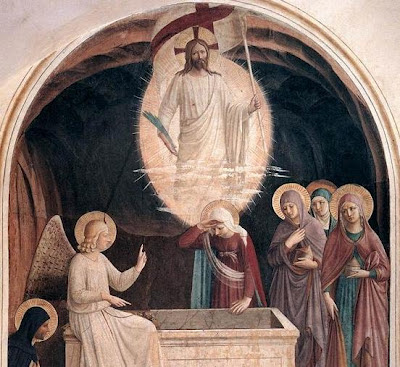 In hundreds of churches all over the world, some version of this hymn was sung this morning, but probably not this particular one. Many more sang at least this tune, but with a different (perhaps related) text.

Once again the Word comes true, Alleluia!
All the earth shall be made new, Alleluia!
Now the long, cold days are o'er, Alleluia!
Life and gladness are before, Alleluia!

Jesus Christ is ris'n today! Alleluia!
Christ our Light, our Life, our Way, Alleluia!
Who, by dying conquered death. Alleluia!
Ever sing our love and faith! Alleluia!

As I said, there are, and have been many different versions of this text in English over the last three centuries (it originally derives from a Latin text, perhaps from the fourteenth century). The last stanza here comes from a nine-stanza version published in 1800. The third and fourth stanzas are actually taken from a text by the Unitarian Samuel Longfellow. I can't prove this, but it seems possible that it was written so that Unitarians could get to sing this popular tune also (though it may have only been matched to this tune later).

The second stanza no longer appears in many hymnals, but it actually comes from Lyra Davidica (1708 - full title: Lyra Davidica, or a Collection of Divine Songs and Hymns, partly new composed, partly translated from the High German and Latin Hymns; and set to easy and pleasant tunes), the book where three stanzas of the old Latin text were first translated into English. That version reads:

Jesus Christ is risen today, Halle-Halle-lujah.
Our triumphant Holyday
Who so lately on the Cross
Suffer'd to redeem our loss.

Haste, ye females from your fright
Take to Galilee your flight
To the sad Disciples say
Jesus Christ is risen today.

In our Paschal joy and feast
Let the Lord of life be blest
Let the Holy Trine be prais'd
And thankful hearts to Heaven be rais'd.

The third stanza of this version seems unlikely to be revived; particularly the reference to the "Holy Trine" which does not appear to be a usual shortening of "Trinity," but perhaps an alteration to make it fit the meter of the text.

There is a similar hymn by Charles Wesley which is sometimes sung to this tune: Christ the Lord is risen today, which you might have sung today instead (particularly if you're a Methodist). Many hymnals have even combined stanzas from Wesley and the original.

The tune known now as EASTER HYMN, as first printed in Lyra Davidica is not what we sing today. There it was described as "a little freer air than the grand movement of the Psalm tunes." A later arrangement, closer to what we know, appeared in The Compleat Psalmodist (1749), and this version was later harmonized by William H. Monk. In at least one nineteenth century hymnbook, the tune was matched with a very different text by Charles Wesley: Hark, how all the welkin rings, which we know today by a rather different first line. Christmas might feel a bit different today if that had caught on.

P.S. The art above, The Resurrection of Christ and Women at the Tomb is a fresco by Fra Angelico, from the Convent of San Marco in Florence.

Two Years Ago: The strife is o'er, the battle done