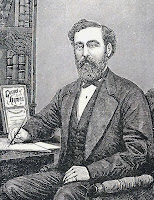 Today is the 175th birthday of the musical evangelist Philip Paul Bliss (July 9, 1838 - December 29, 1876).  Born in northern Pennsylvania, he made his first profession of faith at age 12 and joined the Cherry Flats Baptist Church. Around the same time he decided to pursue his interest in music, which would eventually lead to his becoming a traveling music teacher before he began composing tunes and writing texts both sacred and secular.

After achieving some success as a songwriter, he and his wife Lucy moved to Chicago where he worked in a music publishing company owned by George Root, the company that had bought Bliss's first song earlier.  While he conducted singing schools and musical conventions for the company, his songs were published in their books.

He met Dwight Moody in 1869, and was encouraged to join the Moody-Sankey evangelical organization, which he finally did in 1874.  He was returning to join the revival tour after Christmas in 1876 when he and his wife Lucy were killed in a train wreck in Ohio.  This song, which tells part of the story of Paul and Silas in prison from Acts 16:20-26, appeared after his death with music by his friend Daniel B. Towner.

Night had fallen on the city,
And the streets at last were still,
Where the noisy throng the day long,
Did the air with shoutings fill.
And the weary wayworn travelers
Preaching Jesus thro’ the land,
Paul and Silas, thrown in prison
At the magistrates’ command.

Many stripes to them were given
Many curses on them cast;
Many bolts and bars surround them,
In the stocks their feet were fast.
While the trusty Roman jailers,
All securely slumbering on,
Little dreamed the mighty wonder
Of the morrow’s early dawn.

Hark the sighing of the prisoners,
Hear their moanings loud and long;
No, again, and louder, clearer,
’Tis the voice of prayer and song.
See, the prison walls are shaking,
And the door wide open stands;
Lo, the earth, the earth is quaking,
Loosed are every prisoner’s bands.

Oh, there’s not a cell so lonely,
But a song may echo there;
Oh, there’s not a night so cheerless,
But there’s potency in prayer!
Sing, oh sing, thou weary pilgrim,
Song will bring thee heav’nly peace,
Pray, oh pray, thou burdened prisoner,
God will give thee sweet release.

After Bliss's death, Towner also wrote the Memoirs of P.P. Bliss (1877) which can be read online.

Philip Bliss is sometimes credited as the person who coined the term 'gospel song' to describe this kind of music that was becoming popular in the 1870s, developing out of the earlier Sunday School songs of people like William B. Bradbury and William Howard Doane. This attribution may be only because a collection he edited in 1874 happened to be titled Gospel Songs.  This book also contained a tune written by Lucy Bliss; now I shall have to see if I can find any more music written by her.