The Feast of the Ascension 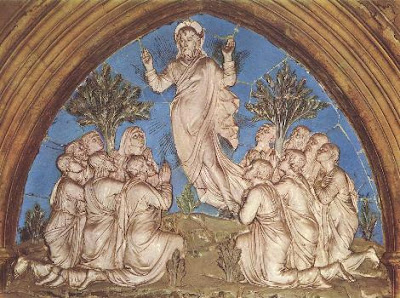 He is gone—a cloud of light
Has received him from our sight;
Through the veils of time and space,
Passed into the holiest place;
Still his words before us range
Through the ages as they change:
Wheresoe’er the truth shall lead,
Christ will give whate’er we need.
He is gone—towards their goal
World and church must onward roll;
Far behind we leave the past;
Forward are our glances cast:
Though himself no more we see,
Comfortless we will not be:
No, the Spirit still is ours,
Quick'ning, fresh'ning all our powers.
He is gone—but we once more
Shall behold him as before;
In the heaven of heavens the same,
As on earth he went and came;
In the many mansions there,
Place for us he will prepare;
In that world unseen, unknown,
Christ and we shall yet be one.
He is gone—but not in vain,
Wait until he comes again:
Christ is ris'n, he is not here,
Far above this earthly sphere;
Evermore in heart and mind
There our peace in him we find:
To our own eternal Friend,
Thitherward let us ascend.
Arthur P. Stanley, 1859; alt.
Tune: CULFORD (7.7.7.7.D)
Edward J. Hopkins, 1867
This hymn is a bit of a cut-and paste job. The original text appears to be in six verses, though I have mostly seen it in four. I've rearranged a few lines here and there while keeping the same progression of ideas. Admittedly, the tune CULFORD is not particularly well-known. Edward Hopkins wrote a number of hymn tunes, though the only one still familiar to many would be ELLERS. Sullivan's hymn tune ST. PATRICK was specifically written for this text, but it's not one of his better efforts. I almost like ABERYSTWYTH, but the mood is not quite right. The text could also be sung to EASTER HYMN, though I don't think anyone would (matching up the Alleluia sections would be a chore for many).
Posted by C.W.S. at Thursday, May 01, 2008