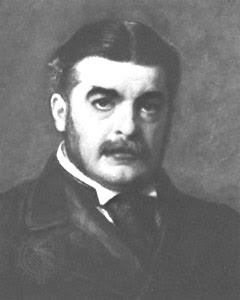 Arthur Seymour Sullivan, born on this day in 1842, was one of the most pre-eminent composers of the Victorian era, though his fame was not in the arena he would have preferred. He became best known for his collaboration with W.S. Gilbert on fourteen comic operas, but he wanted to be admired for his more serious output. He was probably wrong about that.

However, Sullivan did produce a good number of anthems and hymn tunes, as well as four major choral works (The Prodigal Son, The Light of the World, The Martyr of Antioch, and The Golden Legend). This church and choral music was hugely popular in its time and for many years after, but has gradually fallen out of favor.

His best-known hymn tune has always been ST. GERTRUDE, but even that is in danger of becoming lost, since the text it is nearly always paired with is Onward, Christian soldiers. Over the last twenty years, most new hymnals have left out that hymn, and now a whole generation of churchgoers haven't learned Sullivan's tune either.

The Unitarians came up with a solution even before the "problem" of OCS's militaristic language became widely expressed in other denominations, by pairing the tune with a different text.

Forward through the ages, in unbroken line,
Move the faithful spirits at the call divine;
Gifts in diff'ring measure, hearts of one accord,
Manifold the service, one the sure reward.

Refrain
Forward through the ages, in unbroken line,
Move the faithful spirits at the call divine.

Wider grows the vision, reign of love and light;
For it we must labor till our faith is sight
Prophets have proclaimed it, martyrs testified,
Poets sung its glory, heroes for it died.
Refrain

Not alone we conquer, not alone we fall;
In each loss or triumph, lose or triumph all.
Bound by God's far purpose in one living whole,
Move we on together to the shining goal.
Refrain

There was, in fact, a real Saint Gertrude, but following Victorian custom, Sullivan really named this after an acquaintance, Gertrude Clay Ker Seymer, at whose country home he composed the tune.

Most of Sullivan's hymn tunes were composed early in his career. He edited a hymnal, Church Hymns With Tunes, published in 1874. I've been looking through it and it's not exactly what might be expected, that is, stuffed full of the high-Victorian tunes of his colleagues in the church music business. While there is certainly some of that (including thirty-eight of his own tunes and even more of his arrangements and harmonizations), the tunes of popular contemporaries like John Bacchus Dykes and Joseph Barnby are really not very prevalent, especially when compared with other hymnals of the late 19th and early 20th centuries. Sullivan uses many German melodies, older English composers such as Gibbons and Tallis, Lowell Mason to represent the Americans, and psalter tunes from the 17th and 18th centuries, as well as some older chant melodies. Yes, some of these things are "arranged," but I was surprised at the breadth of the music offered. Sullivan also included five hymns with tunes by women, a very high percentage for that time. I don't think there are many other hymnals with three tunes by Frances Ridley Havergal.

Toward the end of his life, he was commissioned to write a tune for a hymn written by Bishop William Walsham How to celebrate the Diamond Jubilee of Queen Victoria. The tune, BISHOPGARTH, was sung with How's O King of Kings, whose reign of old throughout the churches of England on Sunday, June 20, 1897. Four more tunes were discovered and published after his death in 1900. Critics continue to debate his overall contribution to hymnody, but there aren't many people who have written anything so familiar as ST. GERTRUDE.
Posted by C.W.S. at Tuesday, May 13, 2008

I acquired several old hymnals a couple days ago, among them the (American) Baptist Hymnal of 1883, and noticed that it has ST. GERTRUDE (with "Onward, Christian Soldiers"), but calls it simply "GERTRUDE". Unfortunately it is just a hair too old to have "O Little Town of Bethlehem", so I can't check whether the editor (W H Doane) would similarly have decanonized Lewis Redner. We Baptists sometimes go in for a bit of anti-hagiolatry, but I'm not sure if that's the motive here. I also noticed that this hymnal calls what is now universally AZMON ... "DENFIELD".

A "solution" similar to "Forward through the ages" can also be seen in the use of NATIONAL HYMN for "Heralds of Christ" by those who perhaps feel "God of Our Fathers" is either to nationalistic or to patriarchal or both.

I'd be interested in knowing if any use has been made of tunes from the Gilbert & Sullivan Savoy Operas as hymn tunes. I used a couple of them in my "comic oratorio" Jonah was a Prophet (Minor), but I'm talking about serious texts—I set "Just Kill Me" to "Tit-Willow" from The Mikado and "Bow, Bow, Ye Ninevitic Masses" to the "March of the Peers" from Iolanthe.

Gertrude and Louis are certainly two of the more popular saints' names given to hymn tunes - might be interesting to check Anne and Agnes also.

"God of our fathers" seems less problematic to me than OCS, and easier to alter. We were quite satisfied with our version, which I will probably bring out on Independence Day. It's not a matter of changing a few words with OCS - it's the whole theme. Other similar militaristic hymns have also faded away (e.g. "The Son of God goes forth to war") but I suspect there's less notice because they aren't as strongly associated with a popular tune. When people object to "losing" OCS it has as much to do with the tune as with the text.

I don't recall ever running across any G&S-adapted hymn tunes. Sullivan would probably not have approved; though he doesn't appear to have been a particularly religious man, he did have his own sense of churchly decorum (which I think worked against him in his hymnwriting - too many dull tunes and not enough with the drive and flair of ST. GERTUUDE).

Other "serious" opera composers did have some tunes adapted into hymns (MANOAH generally attributed to Rossini). A while back I did come across a gospel song set to a chorus from "Lucia di Lammermoor." and I have seen other supposedly Donizetti-derived tunes. The pop music of the late nineteenth century...

As long as one doesn't lose sight of Ephesians 6:12, I don't think OCS has to be taken as militaristic. At our Spring Concert last night we sang 5 stanzas (all except the last) of The Battle Hymn of the Republic, which I think is much more militaristic.

And who says ALL SAINTS, NEW isn't a popular tune ;->?

I once heard on my car radio a symphonic piece by Sullivan in which he quotes or reprises his St Gertrude (Onward Christian Soldiers) tune, and I've been trying to track down that orchestral piece ever since. Does anybody know it?