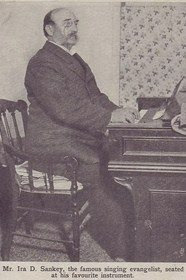 Today is the birthday of Ira David Sankey (August 27, 1840 - August 13, 1908), known in his time as the "sweet singer of Methodism" to millions around the world. He grew up in rural Pennsylvania, developing his musical talents from an early age. He became active in the Methodist Episcopal Church as a Sunday School leader and choir director. He enlisted in the army just before the Civil War, and organized a choir in his Maryland regiment, also helping the chaplain in services by leading the songs.

Following the war, he joined his father in the Internal Revenue Department, but also volunteered with the YMCA and continued to gain popularity as a song leader thoroughout Pennsylvania and Ohio. It was during the international YMCA conference in Indianapolis in 1870 that he met the evangelist Dwight L. Moody, when he spontaneously led a hymn (There is a fountain filled with blood) during a Baptist service conducted by Moody.

The following day, Moody arranged for them to meet on a street corner, where he asked Sankey to sing Am I a soldier of the cross. A crowd soon gathered, and Moody began to preach, then announced that the service would be continued at the nearby Opera House. The assembly followed the two men down the street, singing Shall we gather at the river. Moody had already recognized Sankey's potential and insisted that he join the crusade.

Sankey eventually agreed, and the two men worked together for more than twenty-five years, bringing their traveling crusade all over the US, to Canada, Mexico, England and Scotland. In their time, they were as well known and popular as Billy Graham would be in the twentieth century, and they did it without the mass media of radio and television.

Sankey began to write his own tunes for the songs Moody wanted to use in their services, and all the gospel songwriters of the day wanted to work with him. Any song used in the Moody-Sankey services would immediately become known to thousands of people. Gospel songs became popularly known as "Sankey songs," even ones he hadn't written. Sankey compiled several collections of hymns and songs which were huge best sellers and the income from these books went to several charitable ventures supported by Moody and Sankey.

Ira Sankey wrote dozens of tunes, many of which survived into the twentieth century and some even to the present. Perhaps the most popular was The Ninety and Nine, which was reportedly improvised on the spot during a service in 1874, where he hoped he could remember what he had played before as he went through the verses. You can hear Sankey himself singing this song at this page.

Later in life, Sankey was the president of the Biglow & Main Company, perhaps the most prominent publisher of gospel songs, where he continued to work with gospel songwriters, This song from that period, its theme taken from Psalm 17:6 (Hide me under the shadow of thy wings), is still sung and remembered by many.

Under your wings I am safely abiding,
Though the night deepens and tempests are wild,
Still I can trust you; I know you will keep me,
You have redeemed me, and I am your child.

Under your wings, what a refuge in sorrow!
How the heart yearningly turns to its rest!
Often when earth has no balm for my healing,
There I find comfort, and there I am blessed.
Refrain

Under your wings, oh, what precious enjoyment!
There will I hide till life’s trials are o’er;
Sheltered, protected, no evil can harm me,
Resting in Jesus, I’m safe evermore.
Refrain

Sankey's autobiography appeared in 1906, having been dictated from memory when the original manuscript was lost in a 1901 fire. During the last five years his life, Sankey was blind. He lived in Brooklyn at the time, and he and his old friend Fanny Crosby would sit together, singing and praying.

One of Sankey's sons, Ira Allan Sankey, also wrote tunes for gospel songs and succeeded his father at Biglow & Main. Sankey's songbooks remained in print for many years after his death in 1908. 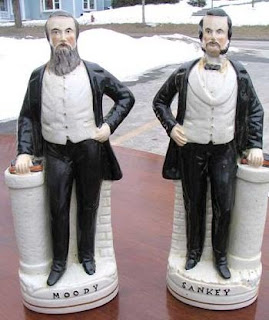 One of my favorite songs whose tune derives (via multiple folk processes) from Sankey is "I Bid You Goodnight"; originally a Sankey hymn "The Christian's 'Good-Night'", this song entered the folk realm in the Bahamas, whence it was adopted by the Grateful Dead as their signature concert-closer, and now in this form (recorded by Tom Rawson) it frequently graces folkish venues in the Seattle area.

PS I wasn't missing, just not posting much

Fixing the link to The Christian's "Good-Night" (I hope)

Thanks, yes, I meant to link to the Cyber Hymnal's entry.

I have a friend whose Presbyterian mother (now deceased) would comment on gospel songs that they were "too Moody-Sankey" for use in the Presbyterian church!