Today is the birthday of Charles Wesley (December 18, 1707 - March 29, 1788), who helped his brother John in founding the movement that eventually became the United Methodist Church. Though John wrote much of the underlying theology, it was undoubtedly the hymns of Charles that spoke most directly to the people of that church over the last three three centuries. Most Methodist hymnals have been compiled around his texts, and though the current United Methodist Hymnal (1989) is down to only 41 by him, that's a good number for any one person to have in a modern denominational collection. Of course, Wesley is well-represented in the hymnals of many other churches as well.
Like Luther, Charles Wesley is one of those people who have been written about much more extensively than I could adequately cover here. Since I missed an Advent hymn for last Sunday, I thought I would present Wesley's most well-known Advent text on his birthday today (incidentally, the very first Advent hymn presented here more than two years ago was also by him).
This one, which probably still appears in the hymnals of most churches today, was first published in Wesley's Hymns for the Nativity of Our Lord (1745). There it was arranged in only two stanzas; though he is often cited for his long texts, such as the nineteen original stanzas of O for a thousand tongues to sing, he was also able to be brief at times.
Come, thou long-expected Jesus
Born to set thy people free;
From our fears and sins release us,
Let us find our rest in thee.

Israel’s Strength and Consolation,
Hope of all the earth thou art;
Dear Desire of every nation,
Joy of every longing heart.

Born thy people to deliver,
Born a child and yet a King,
Born to reign in us forever,
Now thy great dominion bring.

If you prefer this in two stanzas rather than four, you probably sing it to the ubiquitous HYFRYDOL, which of course is 8.7.8.7.D. (for double). In the UK they frequently use the John Stainer tune CROSS OF JESUS (again in four stanzas) and several other tunes have been sung over the years with these words.
Charles Wesley wrote between 5500 and 6000 hymn texts, and as usual you can see and hear many of them (though still a small fraction) at the Cyber Hymnal site, and of course you can click on his name below for the ones I've written about here. I wondered, however, whether I could find them all online somewhere, so I started at the site of the Charles Wesley Society. Before long I was directed to the Duke Divinity School site, where they do indeed have searchable PDF files of both his published verse and that which remained in manuscript at the time of his death. 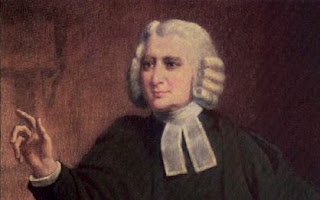 Sounds like you 'wonder' as I do, about something hymn-related and end up on quite the search! I will have to check out that site... Both "Come, thou..." and "Lo, Christ comes..." are good Advent texts. I have wonderful memories of the latter as part of the Advent Lessons and Carols at All Saints' Anglican here in Winnipeg, with their men and boys choir in years past.

Hello, my name is Kevin James, and I greatly appreciate your site. I am a writer of hymns, and I have recently written 4 hymns and licensed them for free use and distribution. I would greatly appreciate it if you would look at my hymns on my website and see if they interest you http://www.musicbykevinjames.com/hymns.cfm

Thanks for stopping by, Kevin.

Your hymns don't meet the textual criteria I have here at the blog (most closely summed up by the "USS OH Conf Guidelines" link at the right side of the page) but I would still encourage people to look at what you've done at your site.

Having more hymnwriters in the world is always a good thing.