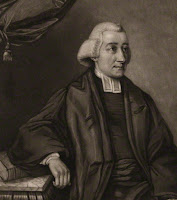 Today is the birthday of Augustus Montague Toplady (1740-1778), author of one very well-known hymn (Rock of ages, cleft for me - found in more than two thousand American hymnbooks alone, as enumerated at Hymnary.org) and several others which have lapsed into obscurity. He has been described as an "Anglican Calvinist," ordained in the Church of England but firmly believing in many of the tenets of the Reformed tradition, founded by John Calvin in the sixteenth century. Years later, he compiled and published Historic Proof of the Doctrinal Calvinism of the Church of England (1774).

Toplady became a Christian while attending Trinity College in Dublin, after a sermon by a Methodist lay preacher named James Morris. There were various theological disputes in Methodism at this time, and eventually these were to put Toplady in direct conflict with John Wesley, one of Methodism's founders. During one published exchange, he wrote:

"I do not expect to be treated by Mr. John Wesley with the candour of a gentleman or the meekness of a Christian, but I wish him, for his reputation's sake, to write and act with the honesty of a heathen."

Most, if not all, of Toplady's hymns were eventually gathered into a collection he published, Psalms and Hymns for Public and Private Worship (1776). The opinion of them in his day (which persists to our time) was decidedly mixed, which probably explains why he is only remembered for one hymn today. One contemporaneous critic dismissed his hymn texts, summing up his work with the statement: "He is a fervent preacher, not a bard." Perhaps his protracted dispute with John Wesley also had something to do with this reputation.

He contributed to the Gospel Magazine and served for a time as its editor. Today's hymn was published there in December 1774. More than twenty years ago we included this in the hymnal project which I participated in because we liked the fact that it called God by several different names.

Inspirer and Hearer of prayer,
Redeemer and Guardian divine,
My all to your covenant care,
Forever I freely resign.

If you are my Shield and my Sun,
The way brings no terror to me;
When enemies seem to have won,
My Comforter true you will be.

A mighty Protector I have,
Unseen, yet forever at hand;
Unchangeably faithful to save,
Almighty to rule and command.

You smile, and your comforts abound,
Your grace, as the dew, shall descend;
And walls of salvation surround
The soul you delight to defend.

Something that interests me (but perhaps not many others) is that while this text is written in stanzas of four lines of eight syllables, it isn't really a Long Meter text because the emphasis in each line is on the second syllable rather than the first, so most LM tunes do not fit it. Years ago we matched it to a tune called DONCASTER OLD, but I couldn't find that one online and had to pick a substitute (which took a long time!).