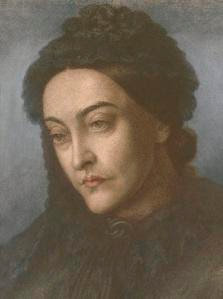 Today we celebrate the birthday of Christina Rossetti, less famed as a hymnwriter than as a poet, though a few of her poems have been made into hymns and anthems. She is considered a major poet of the Victorian era and there is much information online about her should you want to read further.

She was born in 1830, into a family of writers that included her father, sister, and two brothers, all of whom published either poetry or biography. Her brother Dante Gabriel Rossetti was a renowned painter as well (the portrait of Christina here is his).

Christina, her mother, and sister Maria all became devout Anglicans (her sister even becoming a nun). Christina was especially drawn to "high church" practice, and followed the church calendar faithfully, observing saints' days and times of fasting. She broke two separate engagements because the men did not live up to her religious expectations.

Her best known book of poetry is the somewhat surreal Goblin Market and Other Poems (1862), but some feel that her devotional and spiritual poetry in the Anglican literary tradition should be seen as a greater accomplishment.

This poem, titled by her A Christmas Carol, has become her most well-known hymn:

Our God, heaven cannot hold you,
Nor earth sustain;
Heaven and earth shall flee away
When you come to reign.
In the bleak midwinter
A stable place sufficed
The Living God incarnate,
Jesus Christ.

Angels and archangels
May have gathered there,
Cherubim and seraphim
Thronged the air;
But your mother only,
In her maiden bliss,
Worshipped her beloved
With a kiss.

Composer Gustav Holst contributed three tunes to Ralph Vaughan Williams's English Hymnal in 1906, including this one. In 1921, he arranged the tune THAXTED from a melody in the "Jupiter" section of his great orchestral work The Planets to go with the text I vow to thee, my country.

And yes, I know this is a Christmas hymn in Advent, but it is Rossetti's best-loved hymn (and it's not Sunday worship here). She did in fact write an Advent poem, This Advent moon shines cold and clear, but I 'm not sure it would make a particularly good hymn. There are some well-crafted lines, but it lacks the simplicity of her Christmas Carol.
Posted by C.W.S. at Friday, December 05, 2008

Thank you for writing about Christina Rossetti. This is one of my favourite carols. I used to listen to a radio program called "Off the Record" on CBC fm (Canadian Broadcasting Corporation). It was hosted by Bob Kerr and every Dec. he played the Holst setting AND the setting by Harold Darke and compared them and chose his favourite - for the time being. By the next year, it might have changed to the other tune. I love them both. There is also a lovely solo voice setting of this by Eric Thiman. Quite a soaring melody in spots as I recall.

In evangelical/Baptist hymnals lately CRANHAM is often displaced by a tune called CASTLE, which requires some alteration of the poetry. I'm not sure it's any improvement ;-)

But I do think her other Christmas poem, Love came down at Christmas, usually set to the Irish folk tune GARTAN (or Garton) but occasionally to other tunes, is beautiful, and even simpler than "In the bleak midwinter".

I absolutely love this hymn and I am very glad you posted it, C.W.S.!! I really don't care that its a Christmas hymn rather than an advent one.

Leland, thanks for the introduction to her other Christmas hymn, Love Came Down at Christmas. I do believe its a new favourite of mine!

Rossetti even has a third Christmas hymn, this one perhaps more for children:
The shepherds had an angel which you can hear here:
http://www.cyberhymnal.org/htm/s/h/e/shephang.htm

Dorothy, I think I was commenting on your blog at exactly the same time you were commenting here!

Yes, C.W.S., I do believe you are right! We were commenting on each other's blogs at the same time! How funny!

Thanks for the tip on Rosetti's third Christmas hymn. It is a sweet little one and I like it too!

How well I remember singing these beautiful verses at MCC San Francisco!

You provide much valuable info here, but there’s a lot that you don’t say… for example, about her best-known poem “Goblin Market” and its heady mix of same-sex eroticism and Christian allegory. Today (April 27) is Christina Rossetti’s feast day in the Episcopal and Anglican churches -- reason enough to consider her work again. They even have a special prayer about her, which I include on my blog.

It was inspiring to immerse myself in her life while researching and writing a piece about her for the Jesus in Love Blog today:

On a hymn-related note: While researching my piece, I noticed that many singers only do the first and last verses of In the Bleak Midwinter. And there is still another verse that you don’t reproduce here

P.S. Audrey’s half-jesting comment when I told her just now about the little-known verse that says “a breastful of milk” is enough for baby Jesus:

That’s a little risqué for Christmastime! I can see how that one had to go!

That "missing" stanza isn't completely forgotten as it is included in the Harold Darke anthem setting mentioned above. Those lines are a solo there and I know I've sung it a few times over the years.

But it was undoubtedly considered inappropriate when the poem began to appear in hymnals in the early 29th century.