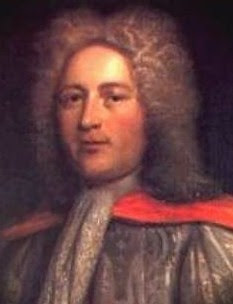 Composer William Croft was baptized on this date in 1678 (his birthdate went unrecorded) in Warwickshire. Like John Goss of a few days ago, he was a boy chorister at the Chapel Royal and continued on after his voice broke, studying composition with John Blow and later assuming Blow's organist position at Westminster Abbey in 1708, as Goss did from Thomas Attwood.

Many of Croft's choral compositions were published in a collection called Musica Sacra (1724), including a Burial Service that is still used at state funerals in Great Britain, most recently for Princess Diana in 1997 and the Queen Mother in 2002.

Croft's hymn tunes were used widely and have appeared in most hymnals up to the present day. His most popular remains ST. ANNE, particularly after it became inextricably linked with Isaac Watts' text O God our help in ages past. Here on the blog we have also heard his ST. MATTHEW. Modern scholarship now doubts whether Croft wrote all of the tunes attributed to him, including this familiar one, but I think his name will remain linked with them.

O worship our God, all glorious above,
And publish abroad God's power and God's love;
Our Shield and Defender, the Ancient of Days,
Pavilioned in splendor, and girded with praise.

O tell of God's might, O sing of God's grace,
Whose robe is the light, whose canopy space,
Whose chariots of wrath the deep thunderclouds form,
And dark is whose path on the wings of the storm.

The earth with its store of wonders untold,
Almighty, thy power hath founded of old;
Hath 'stablished it fast by a changeless decree,
And round it hath cast, like a mantle, the sea.

Thy bountiful care, what tongue can recite?
It breathes in the air, it shines in the light;
It streams from the hills, it descends to the plain,
And sweetly distills in the dew and the rain.

Frail children of dust, and feeble as frail,
In thee do we trust, nor find thee to fail;
Thy mercies how tender, how firm to the end,
Our Maker, Defender, Redeemer, and Friend.

Unlike many English hymnwriters, who either come from the clergy or from clerical families, Sir Robert Grant was a lawyer and politician who was for a time the governor of Bombay. After his death, twelve of his verses were collected by his brother, published as Sacred Poems, and including this, his most familiar hymn, a paraphrase of Psalm 104. There is a sixth verse, often left out of modern hymnals (and generally altered even when printed).

O measureless might! Ineffable love!
While angels delight to hymn thee above,
Thy humbler creation, though feeble their lays,
With true adoration shall lisp to thy praise.
Posted by C.W.S. at Tuesday, December 30, 2008

Thanks for giving (belatedly) the sixth verse; I was counting 'em. ;-) The measureless might verse is so rarely encountered, and I love it. And if you altered it, you did so less, and more tastefully, than the Cyber Hymnal, whose resurrection I note with gladness. I still prefer the monarchical incipit, but I like your revision better than the New Century's "We Worship You, God".

I was raised with a firm and clear distinction in my mind between "O Worship the King", which was to be sung to Lyons, and "Ye Servants of God", which was the text to Hanover. And this is a case where the Anglicans may be against me, but I have the Wesleyans and Calvinists buttressing my position: in my tabulation to date, "O Worship the King" is set 30 times to Lyons vs. only twice (the Yale and Harvard hymnals) to Hanover, whereas "Ye Servants of God" is set 17 times to Hanover vs. 5 times to Lyons.

Other texts I find set to Hanover include "Rejoice in God's saints", "Sing praise to the Lord", and "The kingdom of God is justice and joy".

It may be that in the hymnals you haven't indexed the percentages are nearly reversed. Fortunately I have never had to sing this text (a top ten favorite of mine, which I somehow forgot to mention) to LYONS.

LYONS always seems to me to be the dumbed-down version of HANOVER, and this text I find much preferable to Ye servants of God. So they belong together, in my mind at least.

I think the sixth verse here is the original, or at least pretty close. I'd rather leave it out than change it; I don't think it's as strong as the others (the fourth is about as perfect as a verse ever gets).

I think you're actually probably right about the sixth verse. I enjoy singing it privately, but I'm not sure I'd want to inflict it on a congregation ;-).

Well-accompanied, I agree with you that Hanover is a greater tune than Lyons, but there's that early childhood stuff to deal with, y'know, and I do think that Lyons (dumbed-down or not) is easier to sing, and therefore preferable for situations with weak accompaniment and/or untutored singers.