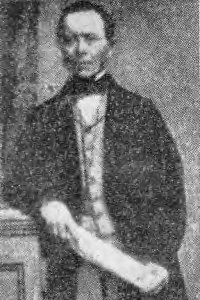 John Goss was almost certainly named for St. John, on whose feast day the little Goss was born in 1800. His father, Joseph, was a church organist and the son eventually followed in this line.

Young John became a chorister at the Chapel Royal in 1811, and later studied music with composer and organist Thomas Attwood. He succeeded Attwood as the organist at St. Paul's Cathedral in 1838 and remained in that position for more than thirty years. He was also a Professor of Harmony at the Royal Academy of Music (a young Arthur Sullivan was one of his students), and was eventually knighted by Queen Victoria in 1872.

During these years he composed mostly church music (anthems, chants, and hymn tunes), though he also produced incidental music for a play, The Sergeant's Wife (sometimes described as an opera, but probably not), and some orchestral music.

His most familiar hymn tune is LAUDA ANIMA, generally sung with Praise, my soul, the King of heaven. My own favorite Goss tune was always ARMAGEDDON, though in recent years I've learned that he only provided the standard arrangement of this tune that was actually written by German composer C. Luise Reichardt. Previously on the blog we have heard Goss's BEVAN. Today we continue in the Christmas spirit with an almost-forgotten song that first appeared with a tune by Goss in Christmas Carols New and Old (1871), collected by John Stainer.

See, amid the winter's snow,
Born for us on earth below,
See the tender Lamb appears,
Promised from eternal years.

Lo, within a manger lies
One who built the starry skies;
One, who throned in height sublime
Sits amid the cherubim.
Refrain

"As we watched at dead of night,
Lo, we saw a wondrous light;
Angels singing peace on earth
Told us of the Savior's birth."
Refrain

Teach, O teach us, Holy Child,
By thy face so meek and mild,
Teach us to resemble thee,
In thy sweet humility!
Refrain

I say "almost-forgotten" but it's probably someone's favorite somewhere. There are actually dozens, possibly hundreds, of really forgotten Christmas hymns, carols, and songs in the hymnals of the nineteenth and early twentieth centuries. We like the standards.
Posted by C.W.S. at Saturday, December 27, 2008

My impression is that "See, amid the winter's snow" is somewhat better remembered (and more often sung) by Catholics than by Protestants, but my RC experience is notable for its paucity, so I may well be wrong about this.

I note the following additional texts for Goss's Lauda Anima:

Day of judgment, Day of wonders
God the Father, name we treasure
God, whose love is reigning o'er us
Jesus came, the heavens adoring
Praise with joy the world's creator
Stars and planets flung in orbit
When our confidence is shaken

As for little known Christmas songs, there are good new ones, too. I am particularly fond of John Kirkpatrick's "Chariots".

As I was reading your introductory paragraphs, C.W.S., I was preparing to come to a new (for me) hymn but was delighted to find an old favorite! I was also feeling a little pleased with myself that I actually knew a hymn that you considered "almost-forgotten!" That so rarely happens! Mostly, I am always playing catch-up in the hymn department. Then I read Leland's comment on your post and my Roman Catholic upbringing may very well be the explanation. "See, Amid the Winter's Snow" is included in the blue Trinity Hymnal which is used at my present Protestant church although I don't recall ever singing it there.

Well, CWS, you're right - this is one of my favourites! I know this carol from hearing it in Anglican services and I might also have it on vinyl with the King's College Choir singing it.

I think one of the reasons I like it so much is that wonderful leap up in the melody from the end of the verse to the refrain. The word "Hail" just jumps right out at us not once, but twice. Then we sing that high note again on the word "Christ" in the final line of the refrain.

Now just thinking through this carol in my head makes me want to go look it up and play it! Thank you.

This morning we sang

The four marked with an * were parishioner requests in a segment called "Choose Your Favorite Carols" immediately following the Call to Worship.

The special music was "Mary, did you know?", solo by Reiff Olsen. The sermon ("The Fullness of God's Grace") was on Simeon and (especially) Anna.

I am happy to hear that Goss's carol is NOT almost-forgotten. Edward Caswall, the writer, converted to Catholicism (after which he write most of his hymns), and many Catholic hymnals in the past preferred to use only hymns by Catholic authors. So it's not too surprising that this one would have lasted there.

Now that I have been challenged, next year I will have to present some of those really forgotten Christmas hymns/songs/carols.

Why next year? There's still seven and a half days to go in this Christmas, including a Sunday! ;-)

True, but the next several days are fairly well booked, allowing fora couple days off (December had a pretty full hymnodic calendar).