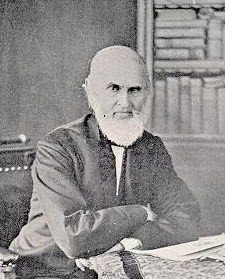 When he was fifteen, a teacher loaned him a volume of poetry by Robert Burns, which he later credited with inspiring his own poetic efforts. A few years later, one of his sisters submitted a poem of his to the Free Press, a weekly paper published by William Lloyd Garrison. The poem was printed, launching Whittier's literary career as well as a long-lasting friendship with Garrison, strengthened by both men's commitment to the cause of abolition.

Whittier was a founding member of the American Anti-Slavery Society, and became editor of the National Era in 1847, one of the most influential abolitionist newspapers. His poetry and articles were also frequently published in the Atlantic Monthly.

Samuel Longfellow and Samuel Johnson were the first editors to turn Whittier's poetry into hymns in their two hymnals, but other hymnals were soon using his texts as well. The hymns that are attributed to Whittier are often excerpted from longer poems, such as this one, six verses taken from the original thirty-seven verses of his poem Our Master.

Our outward lips confess the name
All other names above;
Love only knows from whence it came,
And comprehends but love.

We may not climb the heavenly steeps
To bring you, Jesus, down;
In vain we search the lowest deeps,
For you no depths can drown.

But warm, sweet, tender, even yet,
A present help you'll be;
And faith still has its Olivet,
And love its Galilee.

The healing of your seamless dress
Is by our beds of pain;
We touch you in life’s throng and press,
And we are whole again.

The letter fails, the systems fall,
And every symbol wanes;
The Spirit overshadowing all,
Eternal Love remains.

Whittier remains in many hymnals today. Just this last Sunday, a Whittier hymn sing was held at the Friends Meeting House in Amesbury, Massachusetts, where he worshipped.
Posted by C.W.S. at Wednesday, December 17, 2008

I see you set "Immortal Love" to Bishopthorpe. In my hymnal concordance, to date, there are 18 occurrences of this text, only one of them (in the Disciples/ABC 1970 Hymnbook for Christian Worship) set to Bishopthorpe. By far the commonest setting is Serenity, the only one CyberHymnal.org gives for it. The other four are Beatitudo (New Century Hymnal, alternative tune), Detroit (Yale New Hymnal, 1992), Dundee (Hymns of the Spirit, 1937) and Morning Song (Worship in Song: A Friends Hymnal, 1996). Do you happen to know which tune they sang it to in Amesbury last week? (And what is meant by the odd reference, hidden in the fourth paragraph, to, apparently, two hymn sings on the same day there: "Between the two Hymn Sings and just after, the community is invited to return to Whittier's home for a candlelight tour, conversation and refreshments"?) I think altering the text from third to second person is a good idea, making the text more directed as well as more inclusive.

You really need to index the Episcopal Hymnal 1940. ;)

I like BISHOPTHORPE here because I think it's a good "flowing" tune.

I don't really know anything more about the Whittier event than what's at that link, which I found after the fact. They may well have sung from the Friends' Worship in Song (I don't know how many Whittier hymns are included but I'd guess there are several) and would have used those tunes.

I agree with you about Bishopthorpe "flowing" well—and don't worry, my index is "flowing" in the direction of the liturgical churches, which means Hymnal 1940 will turn up sooner or later ;-) — but at the moment the special recipients of my indexing ministrations are on the respectable hand the Yale (A New Hymnal) and Harvard (Hymn Book 3rd ed.), and on the other a couple of right-wing Baptist collections (Soul-Stirring Songs and Hymns from "Sword of the Lord" publishers, and Majesty Hymns, a Bob Jones-related hymnal...

Oh dear! I guess Leland's philosophical grid places me among the "right-wing Baptists." Sorry I'm not more "respectable"! But, in truth, I work with dozens of hymnals every day, from a wide variety of denominations, respectable and otherwise. And even us right-wing Baptists can occasionally get it right...by accident.

Well, I wouldn't put it quite that way. Our mutual friend was perhaps speaking with a bit of a wink (as I suspect you also may be).

Everyone is welcome here, though you will probably admit that a generic "right-wing Baptist" may not be particularly comfortable with a lot of what goes on. I do try to present my views in a positive way, not by setting them up in opposition to something else. As you may have seen, I don't think debating the rightness or wrongness of word changes or theological views here on the blog is terribly useful; neither side is likely to have its mind changed. You, as a pastor, with a much stronger background in theology, may think differently, but I think we can each see that the other loves hymns just as strongly. I learn things every week on your blog, and I am very happy to see that you are still exploring the "archives" here.