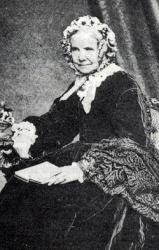 Charlotte Elliott was born today in 1789, in Clapham, which at that time was still outside London. Her grandfather was the evangelical minister Henry Venn, who had worked closely with John and Charles Wesley and was the head of a small group within the Anglican Church called the Clapham Sect. Among its members was the reformer William Wilberforce, and the sect was instrumental in bringing about the abolition of slavery in Great Britain and its colonies.
Elliott was never strong, but a serious illness in 1821 left her with crippling fatigue for the rest of her life. She began writing verse, much of it devotional and much of it intended as hymns for others like herself, for personal rather than congregational use. She began a correspondence with a Miss Kiernan of Dublin, who was also an invalid, and the two began working together on The Christian Remembrancer Pocket Book, an annual journal, and the Invalid's Hymn Book (1834), to the first edition of which Elliott contributed thirty-two hymns. After Miss Kiernan's death Elliott took on the editorship of both the journal and future edtiions of the Invalid's Hymn Book, and by the sixth edition she had included 112 of her hymns (though, of course, in proper Victorian fashion her name did not actually appear anywhere in the book). Other hymns and poems by her appeared in Hours of Sorrow (1836), Hymns for a Week (1839), and Thoughts in Verse of Sacred Subjects (1869 - by which time she was credited as the author).
The oft-reported story of Elliott's most famous hymn has apparently been embellished heavily, if not made up completely. It is true that she met the Genevan evangelist (and hymnist) Cesar Malan in 1822 and that they carried on a correspondence for more than forty years, but it is not so clear that he was directly responsible for her conversion experience, nor that he ever told her that she must come to God “just as you are.”
Just as I am, without one plea,
But that thy blood was shed for me,
And that thou bidd'st me come to thee,
O Lamb of God, I come, I come.

Just as I am, though tossed about
With many a conflict, many a doubt,
Fightings and fears within, without,
O Lamb of God, I come, I come.

Just as I am, thou wilt receive,
Wilt welcome, pardon, heal, relieve;
Because thy promise I believe,
O Lamb of God, I come, I come.

Just as I am, thy love unknown
Hath broken every barrier down;
Now, to be thine, yea, thine alone,
O Lamb of God, I come, I come.

Just as I am, of thy great love
The breadth, length, depth, and height to prove,
Here for a season, then above,
O Lamb of God, I come, I come!

Her sister and brother certainly told the story of this hymn differently; that Charlotte was unhappy because her health made it impossible for her to work at a fundraising event that her brother was heading. This bazaar was to raise money to set up a secondary school for the daughters of clergymen, who were generally unable to afford such schooling. She wrote this hymn, which appeared in the Invalid's Hymn Book, but was also published in a separate pamphlet specifically to raise money for the school, St. Mary's Hall, which it continued to do for several years.
The tune WOODWORTH, by William B. Bradbury, was not written for this text, but was matched to it when it was first published here in the US in 1865, and the two have remained together in most American hymnals ever since. And that's most American hymnals that have been published since -- not just most of those which happen to have this hymn. In its native Great Britain the text is probably most often sung today to the tune SAFFRON WALDEN by Arthur H. Brown, which was written many years after the text, in 1890. Before that, there were various other tunes used, such as MISERICORDIA by Henry Smart (with both of these British tunes you end with only one “I come”). All three of those tunes appear with Elliott's text in Voices Found.
Though Charlotte Elliott wrote about 150 hymns (unfortunately, only a handful can be seen and heard at the Cyber Hymnal) and a few of them are still sung today, this is the one she is remembered for. Following her death in 1871 more than a thousand letters were found among her papers from people who wanted to thank her for writing Just as I am. It was ranked at #26 in The Best Church Hymns (1899) but would almost certainly rank higher today in a similar survey.
One Year Ago: Carl P. Daw, Jr.

I don't ever recall seeing or singing that 5th verse before. Is it often excluded from hymnals? The other 4 I'm sure I could sing from memory with just a few key word hints. Too many repetitions at altar calls....

You sent me off in search of the provenance of the last stanza, as I have known it for a long time.

Turns out that it was not in Elliott's original, but she added it about 20 years later, in a newer edition of one of her books. It's quite in the tradition of having the final stanza of a hymn end up in heaven.

I suspect that it is sometimes left out of hymnals because this hymn has been so frequently used at altar calls and similar occasions, most prominently in the services of the Billy Graham Crusade. Perhaps leaving out heaven makes the "I come" more about the present, even the literal call to come forward.

Not sure that's what Elliott had in mind. Her focus on hymns for "invalids" (and not for congregations) suggests that she was writing this for people who might not live long lives, and thus were "coming" to Jesus sooner than many. I'd say it's the adoption of this hymn for wider use that has led to the interpretation of devoting one's life on earth to Christ. It's not wrong, just different.

And which tune do they sing in Canada?

I was just reading Studying my learning Bible(Women Of Faith) Study Bible;whenI passed through one of Ms. Charlotte Elliott's (Just as I am) and immediately I became curious to who this ladie was. this curiousity led me to do some research on her and the Hymn.How beautiful and inspiring to Know that we all have the same freedom to righfully chose.Thank you for the encouragement that is needed in my life today