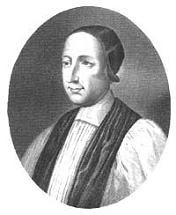 Bishop Thomas Ken is commemorated today in some church calendars, two days after the anniversary of his death on March 19, 1711. Historically he is best known for his actions in the political and religious struggles of his day, but here we are more concerned with his important role in the development of English hymnody.
He was born in July of 1637 in Hertfordshire, and educated at Winchester College and at New College, Oxford. Following his ordination in 1662 he served in small parishes and also returned to Winchester first as a fellow, then as prebendary. During these early years he had written at least three hymns, which are among the earliest written in English (at the time, only psalm paraphrases or texts from Scripture were allowed to be sung in worship). His book A Manual of Prayers for the Use of the Scholars of Winchester College (1674) referred to the hymns but did not include them, so the students were apparently aware of them. The hymns were intended to be used in private devotion rather than public worship. They were not published until a later edition of the book, in 1695. Word about them spread, apparently causing great interest, and over the next several years there were various unauthorized versions published with many changes not made by Ken.
His Evening Hymn we have already seen here, and today we will have his Morning Hymn. Both originally contained many more stanzas than are sung today, and those stanzas have been rearranged and reassembled in many different combinations. Both of them originally ended with the following stanza which became familiar across many denominations and is sung by itself, with one particular tune, much more often than it ever was with Ken's two longer hymns (you may, of course, know it a bit differently).
Praise God, from whom all blessings flow;
Praise God, all creatures here below;
Praise God above, ye heav'nly host;
Creator, Christ and Holy Ghost.
Tune: OLD HUNDREDTH (L.M.)
Louis Bourgeois, 1551
Ken and the students of Winchester might well have sung his hymns for morning, evening, and midnight to that tune from the Genevan Psalter of 1551, but today it is usually used only for that final verse, known universally as The Doxology (as opposed to the small-d doxologies that appear in many other hymns).
In his later years, having fallen out of favor in the religious upheavals of seventeenth-century England, no longer a bishop and living a quiet rural life, he wrote more hymns and poems which were published after his death as Hymns for all the Festivals of the Year (1721). The book contained poems (not many usable as hymns) for each Sunday of the church year and for various saints' days and other occasions. As we have seen, this sort of book was popular in the nineteenth century, with hymn writers such as Reginald Heber, John Keble, Christopher Wordsworth, and Henry Alford producing similar books.
I checked to see what Ken had included for today, the fifth Sunday in Lent, but it was a poem of several pages, in a meter not really amenable to a hymn tune. It closed with the following couplet:
Lord, I now love by faith, a loftier flight
My love will take, when I shall love by sight.
Here below is a version of Ken's Morning Hymn, which is perhaps not quite as well known as his Evening Hymn. Hymnal editors over the years have, in addition to rearranging the text, made various word changes as well, many just because of the distance between the language and syntax of Ken's time and their own. But, as the preface to an edition of his hymns and poems published in 1855 concluded: Occasional quaintness will be condoned for the sake of the holy thoughts and aspirations which abound in the poetry of Thomas Ken.
Awake, my soul, and with the sun
The daily stage of duty run;
Shake off dull sloth, and joyful rise,
To pay my morning sacrifice.

By influence of the Light divine
Let my own light to others shine.
Reflect all heaven’s propitious ways
In ardent love, and cheerful praise.

All praise to thee, who safe has kept
And hast refreshed me while I slept
Grant, that when I from death shall wake
I may of endless light partake.

Guard every spring of thought and will,
And with thyself my spirit fill.
That all my powers, with all their might,
In thy sole glory may unite.

Thomas Ken, 1674; alt.
Tune: MORNING HYMN (L.M.)
Francois H. Barthelemon, 1785
It's true that we don't sing much about “dull sloth” anymore.
The French composer Francois Barthelemon (often called Francis in English-language hymnals) composed this tune for this text.
Note: In our time, hymnals sometimes include selections by English poets such as George Herbert and John Donne who predate Thomas Ken. However, those poems were never seen as hymns by their writers, who perhaps would be scandalized at their use in modern congregational worship. Ken was doing something that few had done before in writing metrical hymns not based on psalms or other Scripture. Others in his day or earlier may have done it also, in private, but it is the hymns of Ken that survived. Of course, he was followed before too long by Isaac Watts, Anne Steele, Philip Doddridge, and others who threw off the constraints of the psalm paraphrase, starting toward hymnody as we know it today.
Posted by C.W.S. at Sunday, March 21, 2010