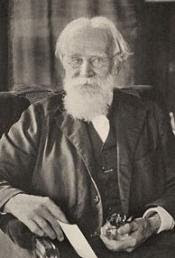 The poet and minister William Channing Gannett (March 13, 1840 - July 25, 1923) was named for William Ellery Channing, one of the foremost Unitarian theologians of the day, who was Gannett's godfather and also conducted the christening. His father, Ezra Stiles Gannett, was also a prominent Unitarian minister in Boston, one of the founders of the American Unitarian Association and later its president.
The younger Gannett followed his father by graduating from Harvard in 1860. He was not sure that he was suited for the ministry, but he entered Harvard Divinity School. He left during his first year to go to South Carolina to work with a group of freed slaves. He spent the years of the Civil War there in the south, where he organized a school and helped that community gain a measure of self-sufficiency, something that many people in South Carolina had little interest in supporting.
When he returned to Boston he eventually finished his studies at the Divinity School and was ordained in 1868. In 1875 he published a biography of his father, who had died four years earlier. He also began a long collaboration with Frederick Lucian Hosmer, and together they compiled Unity Hymns and Chorals (1880) and The Thought of God in Hymns and Poems (1885). Both books went through several editions and were very influential in Unitarian hymnody.
Samuel Atkins Elliot, a later president of the American Unitarian Association, wrote in Heralds of a Liberal Faith (1901) regarding their first hymnal:
...in which, after the manner of Samuel Longfellow (and Samuel Johnson - CWS), they adapted and rewrote orthodox hymns and lay poems for the liberal churches, thereby offending some who believed in sticking to the original texts.
Gannett and Hosmer wrote their own texts to their specifications, of course, so they did not have to be altered (though later generations have followed in their footsteps and done so). Gannett showed a particular affinity for the transcendentalist ideas of Ralph Waldo Emerson, especially in the concept that God's presence can be seen and felt in the wonders of nature. You can see this in the two hymns of his that I've already written about: Bring, O morn, thy music and Praise to the Living God, as well as in this hymn for today.
You hide within the lily,
A strong and tender Care
That wins the earthborn atoms
To glory of the air;
You weave their shining garments
Unceasingly and still,
Along the quiet waters,
In grasses down each hill.

We linger there in vigil
With Christ, who bent the knee
To watch the ancient lilies
In distant Galilee;
And still our worship deepens
And quickens into new,
And bright'ning down the ages
Your secret thrills us through.

Creator of the lily,
With you the heart e'er sings;
No leaf that dawns to petal
But hints of angel wings.
The flower horizons open,
The blossom vaster shows;
We hear your wide worlds echo,
“See how the lily grows.”

The yearnings of the nations,
Unfolding, thought by thought,
To holier lives are lifted,
To futures clear are wrought:
May all advance in justice,
While evils fade and fall,
Till chaos blooms to beauty,
Your purpose crowning all.

William Channing Gannett, 1873; alt.
Tune: MEIRIONYDD (7.6.7.6.D.)
William F. Lloyd, 1840
This text is taken largely from a website called Hymns of the Spirit Three, which modernizes and inclusifies the public domain texts from Hymns of the Spirit (1937), a popular Unitarian hymnal of the last century, which in turn was named for the 1864 hymnal compiled by Longfellow and Johnson. I admit that I've done a bit of further revision (it's hard to resist once you've been doing this for a while).
Posted by C.W.S. at Saturday, March 13, 2010