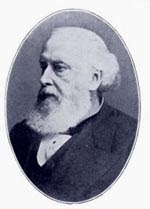 Composer William Henry Monk, born today in 1823 in Brompton, is actually one of the most influential people in the development of hymn tunes as we know them today.
At age 18 he was first employed as a church organist, and served at a few different locations until 1852, when he began playing at St. Matthias Church in Stoke Newington, where he established a daily choral service with only a volunteer choir, and remained there until his death in 1889. He also taught music at various times at Bedford College, the National Training School for Music, The School for the Indigent Blind, and was a professor of music at Kings College.
Monk was intrigued by the Oxford Movement and especially the particular music requirements of high church liturgy. With some friends, he established a musical journal, The Parish Choir, and served as its editor for a time. Though the magazine only lasted three years, it was very influential in Anglo-Catholic circles, and probably led to Monk's employment as the first music editor of Hymns Ancient and Modern, which would eventually sell more than sixty million copies.
In that position, Monk was, in a sense, continuing the work of William Henry Havergal and Henry J. Gauntlett, who in addition to composing their own tunes, often arranged and harmonized tunes from earlier composers into the sort of four-part arrangements we still use today. Monk's own tunes were popular in his time (less so today) but his arrangements of such tunes as ELLACOMBE, ST. MAGNUS, VICTORY, and DIX are still widely known and sung. Remember also that Hymns A&M was one of the earliest hymnals to print the texts and tunes together, which would eventually become the standard.
Monk remained with the Hymns A&M organization, at least in a consulting capacity, until his death, through the editions of 1861, 1868, 1875, and 1889 (his notes on that last edition were completed the day before he died). He also was the music editor of the following collections:
The Holy Year (by Christopher Wordsworth)
The Congregational Psalmist
Psalter, Hymnal, and Anthem Book of the Scottish Church
Book of Common Prayer, with Plainsong and Appropriate Music
This tune of Monk's, originally written for the text Soldiers of Christ, arise, is one that has survived (sometimes called ENERGY). In many Lutheran churches (and probably elsewhere) the first two stanzas were sung each week at the offering. I can still hear my great-grandmother singing this exuberantly.
We give thee but thine own,
Whate’er the gift may be;
All that we have is thine alone,
A trust, O God, from thee.

May we thy bounties thus
As stewards true receive,
And gladly, as thou blessest us,
To thee our first-fruits give.

To comfort and to bless,
To find a balm for woe,
To tend those lost in loneliness
Is angels’ work below.

The captive to release,
To God the lost to bring,
To teach the way of life and peace—
It is a Christ-like thing.

And we believe thy Word,
That strong our faith may be;
Whate’er we do for thine, O Lord,
We do it unto thee.

We have talked more than once about the hymn that is matched with Monk's most enduring tune: EVENTIDE. As he recalled the origin of the tune years later, it was realized at an 1861 committee meeting shortly before Hymns Ancient and Modern was going to the printer that they had no tune for Abide with me (writer Henry Francis Lyte's own tune was deemed unacceptable). Monk went out and wrote EVENTIDE in ten minutes. His wife, however, remembered it differently, telling the editor of The Music of the Methodist Hymn Book (1935) that he wrote it as they watched a beautiful sunset together. Perhaps she thought it was a better tale for posterity.
Posted by C.W.S. at Tuesday, March 16, 2010

"We give Thee but Thine own" is one of the pieces I use following the offering. We sing only v.1 and I alternate this piece with others, often more contemporary, as our response to giving. I only learned this hymn when I began to play at St. Andrew's Presbyterian. The first verse in particular resonates with me.

I can see why the first (and sometimes second) stanzas have been and still are used at or after the offering in many places, but the hymn as a whole broadens the theme beyond money.

Amyway, not everyone uses Monk's tune for this text; I like it, but I also like one called HEATH or SCHUMANN.

The tune we use is FRANCONIA.

I think one of the reasons I like the words is that there is no mention of money! Our stewardship should go far beyond the dollars in our pockets.

Of course you're right, but I have heard it said from the pulpit that those initial stanzas are, in fact, about money.

Sometimes hymns are subject to the same clerical interpretation as scripture!